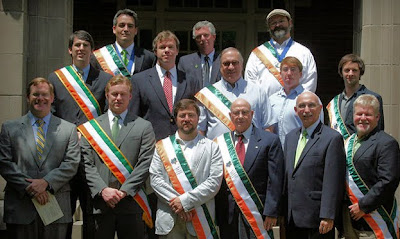 Posted by Murphy at 5:40 PM No comments: 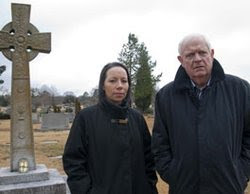 Irish producer and film maker Pat Shine recently created a documentary on the murder of Father Coyle and the miscarriage of justice that followed. The Father James E. Coyle Division is featured in the documentary, which was broadcast nationally in Ireland on March 21 on RTE. From the RTE website http://www.rte.ie/tv/wouldyoubelieve/acrossinalabama.html:

"Well-known Irish singer, Brendan Shine discovers the shocking truth about the murder of his great-uncle, Fr. James Coyle, in Alabama in 1921.

From the outset, Brendan knows from family lore that his great-uncle was killed by a member of the Ku Klux Klan. During the course of making this programme, he uncovers a story which caused a major scandal in the US at that time. One expert described the trial as 'the OJ of hte early 20th century.' The trial of Methodist Minister Rev. Edwin Stephenson, who confessed to the police immediately after the killing, became of show of force by the Ku Klux Klan. How did a court acquit Stephenson, who turned himself into the police, and allow him to walk out of the courtroom a free man, and a local hero? Brendan also discovers that a future Supreme Court Judge played a pivotal role in the trial.

Brendan will discover that Fr. Coyle is considered a martyr for his faith among Catholics in Birmingham, and that there are calls to have him beatified, and eventually to have him canonised a saint.

This programme combines interviews, archive footage, photographic material, and re-enactments of the key moments. Brendan's journey to discover the story will be the vehicle through which the audience will become fully engaged. Filming took place in Ireland and in the US.

A Cross in Alabama is produced and directed by Pat Shine. Pat is Brendan's cousin and hails originally from Waterford. He now resides in Bray, Co. Wicklow."

See the following links for further press about the documentary: 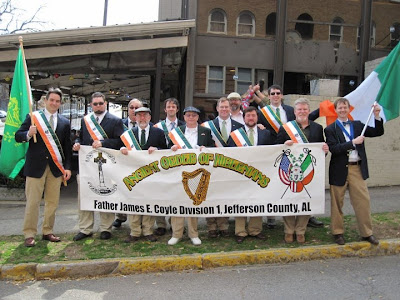 Thank you to everyone who attended the 2nd Annual St. Patrick's Day Celebration or pledged support for the Noah's Light Foundation. Special thank you to Jasper Coal, the Ian Sturrock Memorial Pipe Band, and the Nashville Irish Step Dancers.

The parade and weather were fantastic, and the party itself was great craic. See you next year! 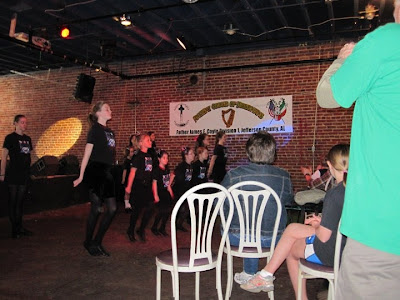 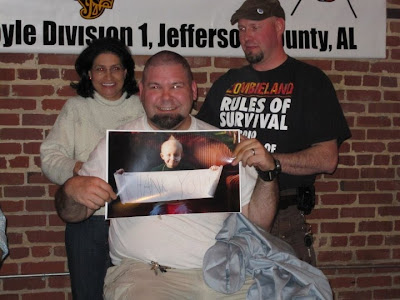 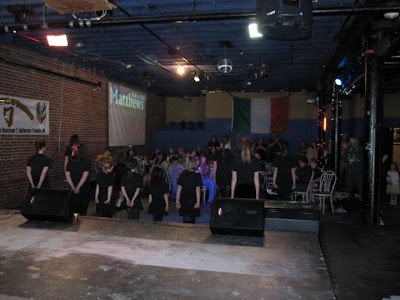 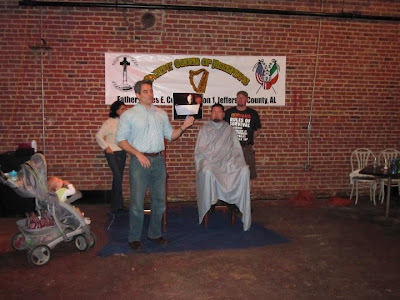 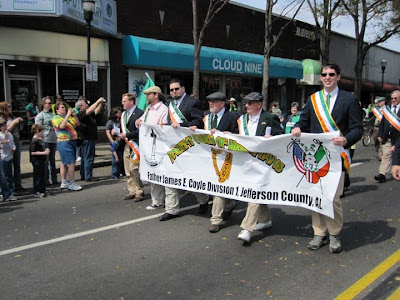 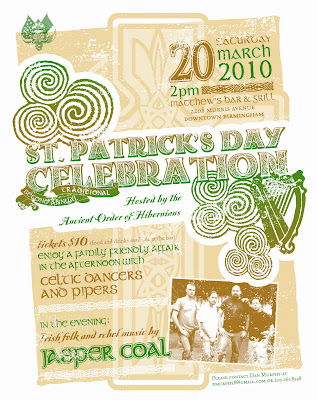 The Father James E. Coyle Division of the Ancient Order of Hibernians will host its Second Annual St. Patrick's Day Celebration in Birmingham on March 20, 2010 at Matthew's Bar and Grill (2208 Morris Avenue in downtown Birmingham).

The celebration will begin at 2:00pm, following the Birmingham St. Patrick's Day Parade and go until the wee hours.

The afternoon festivities will include the Ian Sturrock Memorial Pipe Band, Irish step dancers, and an authentic traditional Irish music session. Children are welcome during the day.

We will be donating proceeds to The Ark, a pediatric cancer research foundation established by the family of Marc Ayers (a Hibernian), whose young nephew Noah has brain cancer. Marc, Hibernians Nathan Tucker of Jasper Coal and Riley Barnacastle, and others will be having their heads shaved at the celebration as a fundraiser in honor of Noah.

Mark your calendars now for Birmingham's only authentic St. Patrick's Day celebration - no plastic beads or green beer allowed.
Posted by Murphy at 1:31 PM No comments:

The 2010 meetings will continue to be on the 3rd Tuesday of every month, St. Paul's Cathedral, 6.30 Mass, 7.00 meeting, pints at Matthew's afterwards. I will send out reminders before each meeting and also let you know if the Mass will not occur. Here are the dates if you want to put them on your calendars ahead of time:

Calling All Irish Men in Alabama 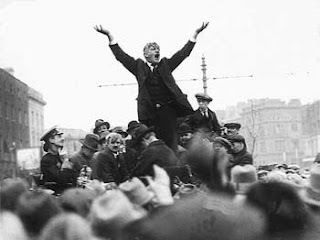 Do you have Irish heritage?
The Birmingham Division of the Ancient Order of Hibernians is holding an informational meeting at the Our Lady of Sorrows Assembly Hall on Thursday, November 19 at 7.00pm. Refreshments will be provided.
The Hibernians are the largest Irish Catholic organization in the country. It is a men's charitable and fraternal organization with membership throughout the U.S. The American organization was founded in 1836 in New York and traces its roots to 16th century Ireland.
Since its inception, the Hibernians have been at the forefront of promoting Irish Catholic culture and causes in the States. The group's motto and primary mission is to promote "Friendship, Unity and Christian Charity."
Membership is available to males over the age of 16 who are Roman Catholic and Irish by descent or birth. Please contact Dan Murphy at dmurphy8@gmail.com for more information.
The photo above is of James Larkin, a leader of the 1916 Irish Rising against the British Crown.
Posted by Murphy at 7:18 PM No comments: 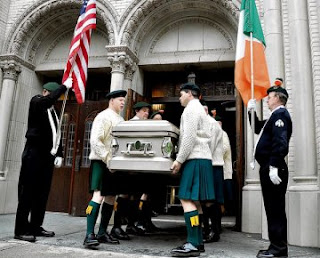 From the Irish Times (http://www.irishtimes.com/newspaper/world/2009/1019/1224256970061_pf.html)
IN THE mid-19th century, newly arrived Irish immigrants wandered Staten Island, penniless and disoriented, scrounging for food, waiting for children, spouses, siblings or parents interned in the quarantine hospital to die or be discharged.
They were remembered here this weekend, at a moving ceremony that united those who left Ireland and those who stayed, forever linked by what Edward Cardinal Egan called “the immense suffering” of the emigrants.
A dozen men in green kilts, white Aran jumpers and berets with Tricolour plumes, from the Ancient Order of Hibernians, were pallbearers for two oversized coffins. A beige coffin contained the remains of adults, a white one the bones of children. Ireland’s Minister for Foreign Affairs, Micheál Martin, the Ambassador to Washington, Michael Collins, and Niall Burgess, the Consul General in New York, represented those who stayed. After the service, women wearing Tricolour sashes seized the opportunity to have their photographs taken with Martin – proof that those who stayed still cared about the ones who crossed the Atlantic.
Some 600,000 European immigrants passed through the Staten Island immigrant station between 1799 and 1858, when it was burned to the ground and transferred, eventually to Ellis Island.
“The Irish influx during the Famine destroyed the quarantine hospital,” explains Lynn Rogers, executive director of the Friends of Abandoned Cemeteries. “The Irish relatives of those in quarantine built a shanty town. The locals didn’t want them. A lot stayed on in Staten Island, including my ancestors.”
At least 1,000 people died in the quarantine hospital, of typhoid and other diseases. They were buried in a mass grave across the road from what is now the Staten Island ferry station. There were Germans, Scots, English, Poles, Czechs and others, but Rogers says the majority were Irish.

In 1957, a car park was built over the mass grave. “We found a whole row of remains cut off at the knee; a bulldozer rolled over them,” says Rogers. “People back then didn’t care.”
Six years ago, the Friends of Abandoned Cemeteries interrupted a plan to build a courthouse on the site of the mass grave, forcing the authorities to excavate and remove the remains of the quarantine victims. Until Saturday, the remains were held in storage. They’ve now been placed in a 19th century receiving tomb, while the former parking lot is transformed into a cemetery.
Cardinal Egan linked the wave of immigration in the 19th century to the present day. “It’s not easy for those who are coming now, just as it was not easy for these children,” he said, gesturing towards the white casket, “and these adults,” he nodded at the beige one. “Imagine the pain of those who saw their relatives put into a mass grave. But somehow we made it, and we became citizens of the United States of America...”
“The famine is the foundation of Irish-American identity,” Consul General Noel Burgess said later. “You’re struck by the strength and integrity of the memory here in America. In Ireland, we dealt with it by forgetting for six generations.”
Martin’s four-day visit to the US started in the 21st century, explaining the Lisbon Treaty. By Saturday, he had journeyed back to the 19th century. At number 7 State Street, on the southernmost tip of Manhattan, he visited Our Lady of the Rosary, where a home for Irish immigrant girls received more than 100,000 of the 308,000 young Irishwomen who passed through the Port of New York between 1883 and 1908.
Maureen Murphy, a history professor at Hofstra University, quotes a certain Cardinal Gibbons, explaining the protective mission of the home at the end of the 19th century: “These young maidens, after escaping the perils of the sea and landing on our shores, become a prey to the land sharks that infest your city” who sought “to rob those innocent and confiding women” of “the jewel of purity, for which the Irish maiden to all the world is so conspicuous.”
Like most of the women who left Ireland at the end of the 19th century, Murphy’s own grandmother worked as a maid. “Irish emigration was unusual, because there were more women than men,” Murphy explains. “The eldest boy inherited the land. One daughter was dowered off. Opportunity for boys depended on the economy, but for the girls there was always work.”
Murphy and Fr Peter Meehan, the priest at Our Lady of the Rosary, want to turn number 7 State Street into a research centre. Fr Peter found five leatherbound registers in a safe, containing the names, ages, county of origin, date of arrival and address of destination of 60,000 women – a gold mine for historians and genealogists.
As a politician, Martin said, he most enjoyed his day on Capitol Hill. But as a former history teacher, he was in his element discussing books with Murphy: “In my journey here, and through the various events I attend, a door keeps opening into the story of the Irish in America for me.”
© 2009 The Irish Times

Welcome to the Alabama AOH! 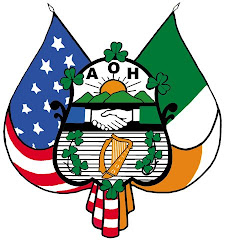